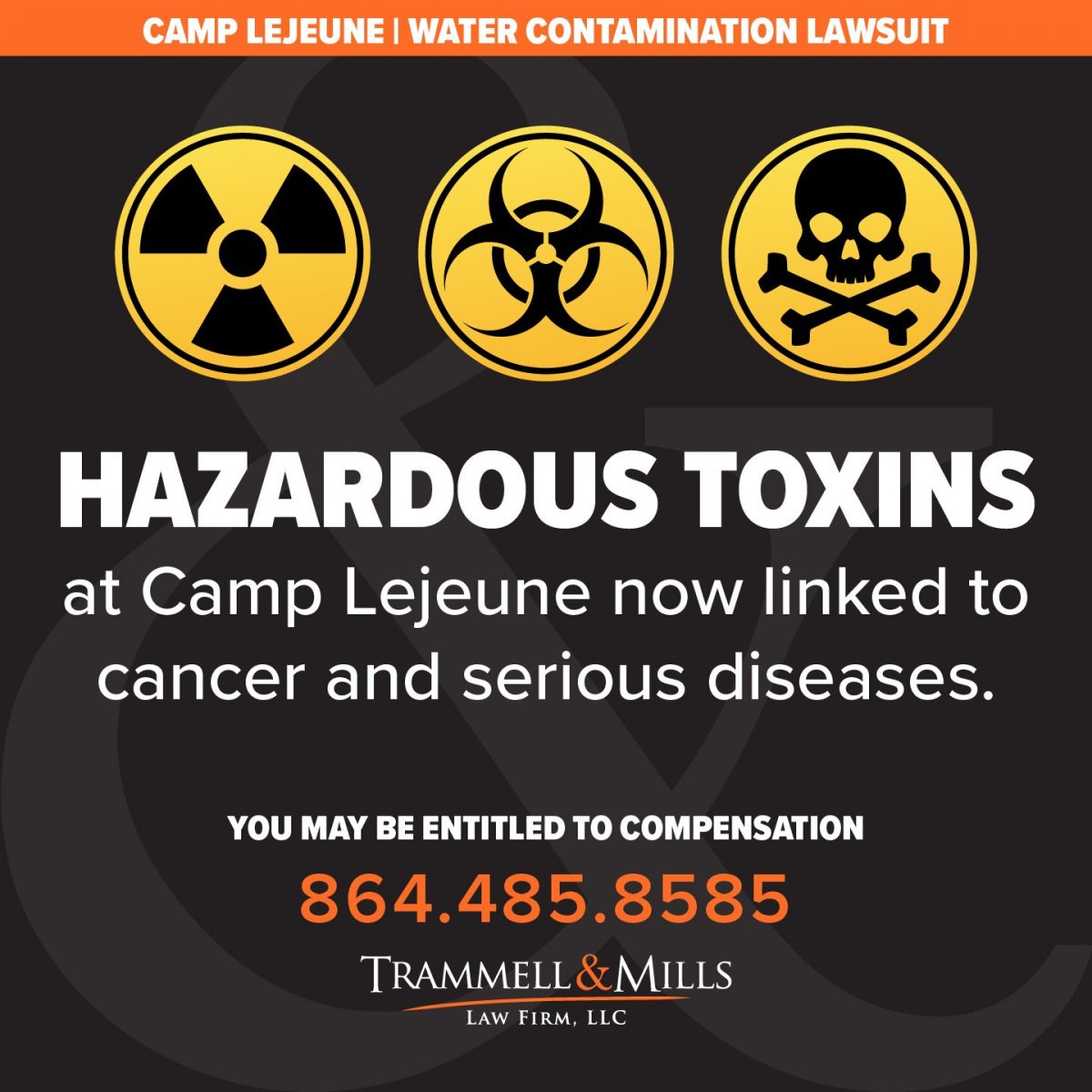 You may know someone who was stationed at U.S. Marine Corps Camp Lejeune between 1953 and 1987.  Maybe you were there yourself.  We at Trammell & Mills want you to know the facts about the possible health dangers of living there at that time.  Thousands of Marines and their families lived on and around the base in Jacksonville, North Carolina in that 34-year span.  The camp got its water supply from eight area wells, and two of those wells produced water that was seriously contaminated with benzene and other dangerous chemicals.

The US Government knew about this toxic water for many years and purposely kept the truth from the public.  Countless military members, their families, and non-military workers were exposed to contaminated chemical levels that exceeded legal limits by more than 100%.  In 2012, Veterans with qualifying medical conditions were granted access to medical care for illnesses caused by tainted Camp Lejeune water, but there was no legal recourse for non-veterans.  More action was necessary for other victims who suffered health issues.

In 2017, the Agency for Toxic Substances and Disease Registry Completed an assessment of the contaminants and filed a comprehensive report.  The findings were devastating.  Last year, Congress passed the Promise to Address Comprehensive Toxics (PACT) Act, which includes the Camp Lejeune Justice Act of 2021.  This law now allows veterans and civilians exposed the contaminated water to file claims seeking compensation for legal damages.

Anyone residing at Camp Lejeune for at least 30 days between August 1, 1953, and December 31, 1987, may file a claim if they have been diagnosed with Leukemia, Bladder Cancer, Kidney Cancer, Liver Cancer, Aplastic Anemia, Multiple Myeloma, Non-Hodgkin’s Lymphoma or Parkinson’s Disease.  Other diagnosed conditions that may apply include Breast Cancer, Esophageal Cancer, Pancreatic Cancer, Prostate Cancer, Renal Toxicity, Female Infertility, Miscarriage, and Lung Cancer.

If you or someone you love has suffered as a result of possible water contamination exposure, you need to contact the Trammell & Mills Law Firm for a free, no-obligation review of your case.  We’ll walk you through your legal options.  The law states that any attorneys handling Camp Lejeune toxic water cases must work on contingency, meaning you don’t pay any legal fees unless we win compensation for you.  Even if you already receive medical benefits or compensation from the Veterans Administration for Camp Lejeune water illness, you can still file a claim under the Camp Lejeune Justice Act.

Hundreds of thousands of people were exposed to cancer-causing chemicals in the water at Camp Lejeune, and they now have the opportunity to seek fair payment for the damages they faced unknowingly.  Veterans who served their country honorably, and their families, have the legal right to seek compensation from the Marines for the pain, suffering, and even death they have suffered over the years.  If you have a Camp Lejeune contaminated water claim, call the local attorneys of Trammell & Mills at (864) 485-8585 to get the peace of mind and payment you deserve.

The South Carolina Supreme Court dismissed disciplinary charges against an Upstate personal injury lawyer known for his catchy television ads, putting an end to a years-long legal battle over whether one of the attorney’s ads aired years ago made misleading promises about protecting jobs.

This investigation arose out of a letter from an anonymous complainant (most likely a competitor) that argued an advertisement Joel Bieber began running in December of 2003 left the impression that hiring Bieber would mean a client wouldn’t lose his job.

It’s not your fault that you were hurt on the job, but I know you’re afraid to file a job injury claim. You’re afraid your boss won’t believe you’re really hurt, or worse, that you’ll be fired. We’ll protect you against these threats and these accusations and work to protect your job.

Bieber, who pulled the ad following the complaint, stated that the ad asserted only that he would work to protect a job and offered no guarantees.

All lawyers, more specifically as it pertains to advertising personal injury lawyers, must adhere to the Rules of Professional Conduct. Those Rules specifically outline communications lawyers can make as to their services.

A lawyer shall not make false, misleading, deceptive, or unfair communications about the lawyer or the lawyer’s services. A communication violates this rule if it:

(a) contains a material misrepresentation of fact or law, or omits a fact necessary to make the statement considered as a whole not materially misleading;

(c) compares the lawyer’s services with other lawyers’ services, unless the comparison can be factually substantiated;

(d) contains a testimonial; or

(e) contains a nickname, moniker, or trade name that implies an ability to obtain results in a matter.

I had never heard of methamphetamine referred to as the “Devil’s Drug”, until I saw what a crushing blow it could have on a local family, leaving young children and a loving wife in its wake.

It’s hard for loved ones and even addicts to reach out for help but there are so many resources made available that I felt compelled to list some of them: